Rain is not a problem here in the Welsh Marches, can’t stop the stuff from coming down. But this has not been the case with all the places I have gardened on or grown nursery stock.

The nursery at Shawbury in north Shropshire had one the driest land I can imagine this country can conjure up. The top was a sandy loam, and dig down a few feet down it was pure red sand, like building sand. Combine this with the low rainfall (such as in 2011) the soil would spill out of your hand like an egg timer. We would have a downpour, the plants would perk up, the next day they were flattened again through lack of water. 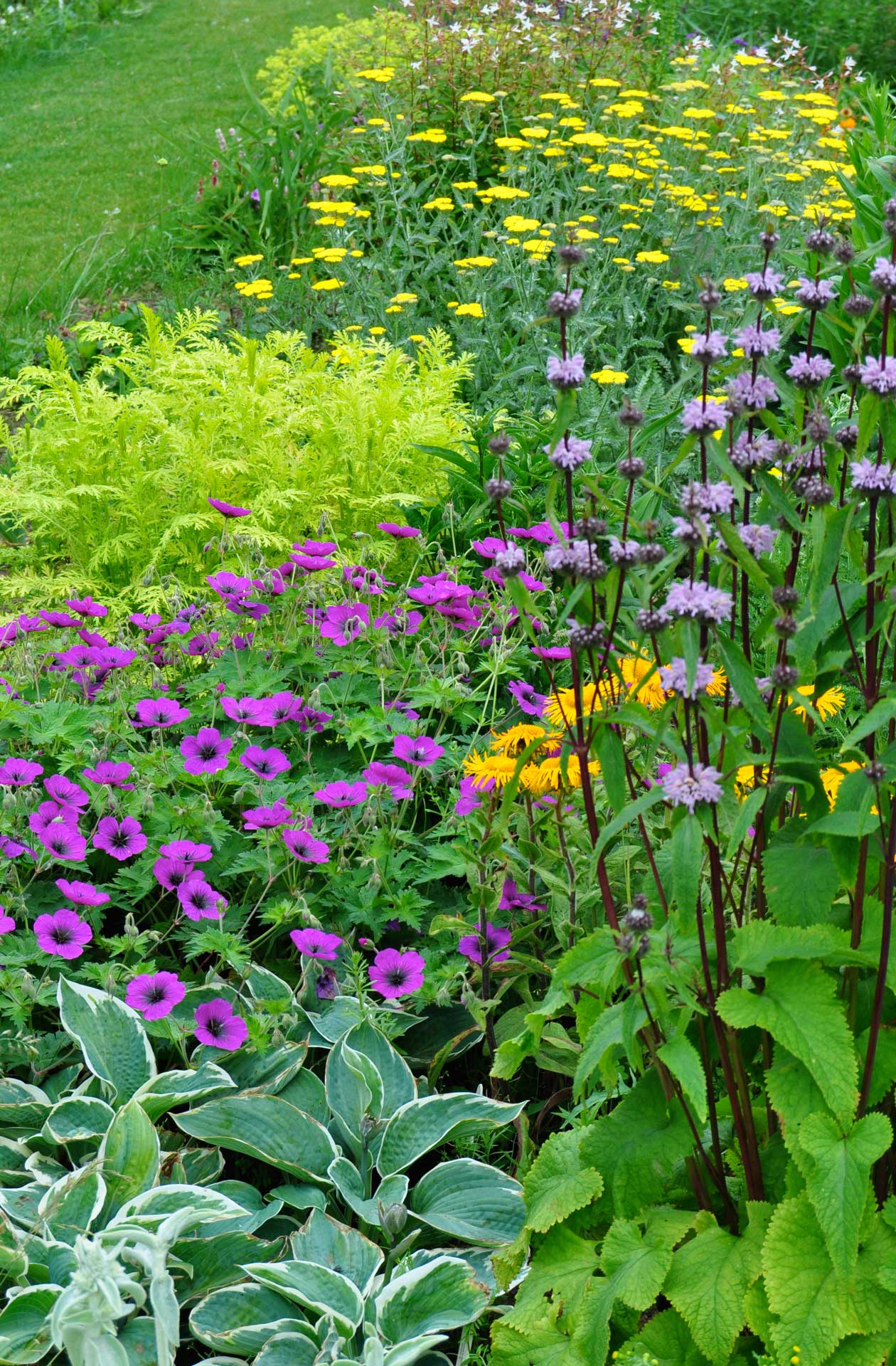 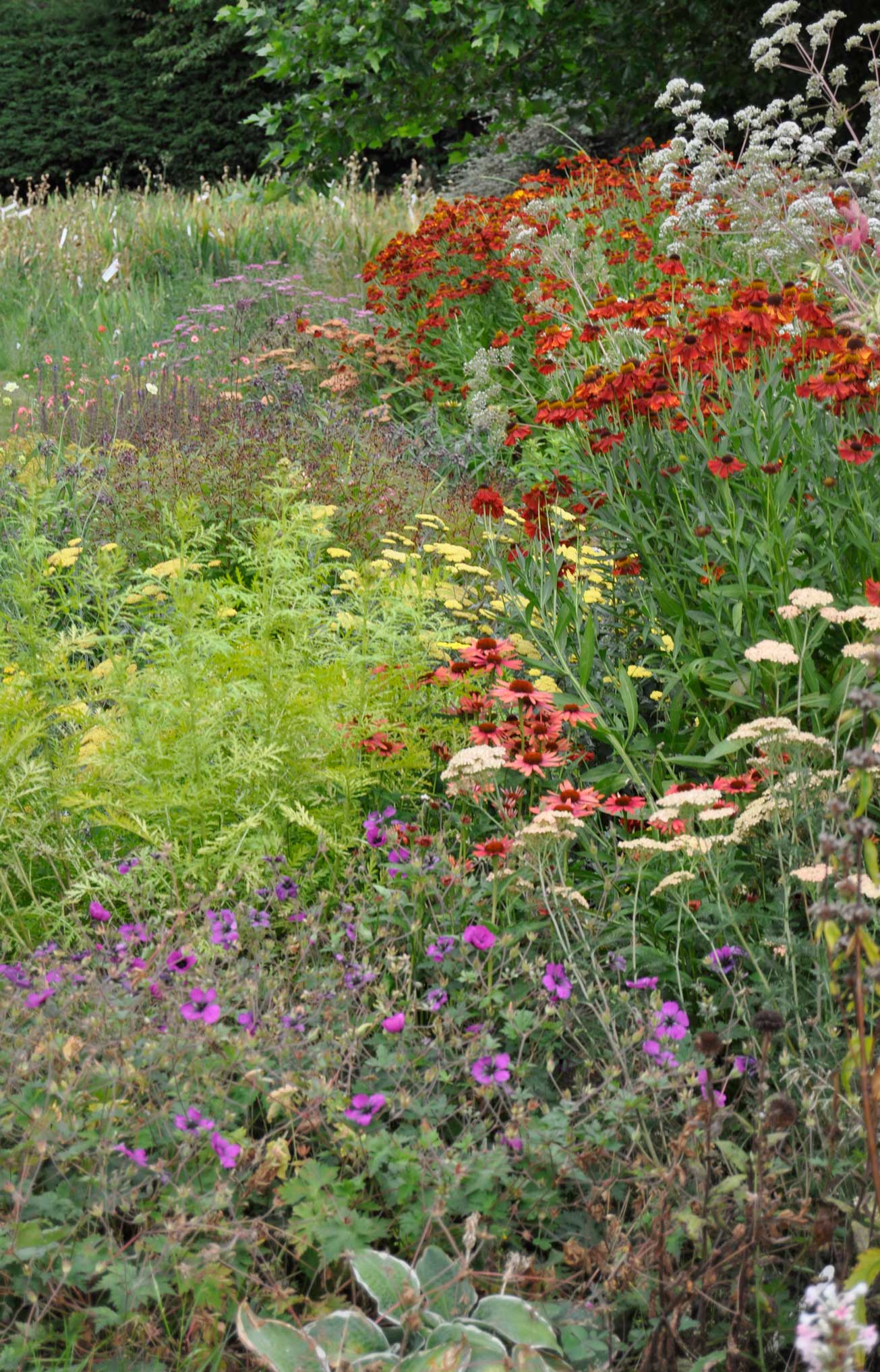 So what did we grow in this garden? Salvias, of any type, all performed well. Heleniums (sneezewort) were marvellous too, even next to a yew hedge. Silvery plants like Anaphalis, Artemisia and Stachys. Leathery Sedums (Ice plant), of all sizes, were great. Spiky things like Echinops (Globe thistle) and Eryngiums (Sea holly). One plant that I had not considered as being good in dry conditions was Gillenia, with its fabulous froth of white flowers and lovely autumn coloured leaves. Another surprise was Hostas. Thought of as plants for placing along streams, many of the newer varieties have thick leaves (such as ‘June’) and are good in dry conditions, and because of the dry are less likely to get chewed by slugs. Achilleas (Yarrow) are a natural lover of dry conditions. You only have to see them growing along roadside verges to know that. Phlomis russelliana with its tiers of yellow flowers and thick evergreen leaves, and Phlomis tuberosa with dusky mauve flowers are both excellent in dry conditions. Hardy Geraniums are good too, as are Euphorbias, Acanthus, Crocosmias, Echinacea, Heuchera, Kniphofia, Nepeta, and of course Peonies.

A Lesson On Growing Bearded Irises In Dry Conditions

Last year proved to be one of the most difficult years for growing bearded irises. Our crop got off to a marvellous start, and by the end of April we had high hopes of a wonderful display of blooms. By the middle of May, due to the lack of water, it became very obvious that the flower spikes were topped with blind buds that were empty of flowers. Many varieties simply refused to put up any flower spikes. By the end of August we were lifting plants with no leaf growth. What a clever plant, it had gone into dormancy to preserve itself. I went back to that field recently (we no longer rent it) and what did I see, thousands of iris leaves, all springing back into life. Lesson – nothing kills a bearded iris (except acid soil!)

First thing to remember is that in this country it rarely stays dry for too long. We may not have enough rain to fill the reservoirs but perhaps that is because we have so many people using the water. The rain that falls, combined with morning dew, and mist settles on the leaves of plants. This gives them water. So there is no need to water the garden unless you have just put plants into the ground or you have plants in pots. By not watering plant roots will be forced to find the water and go deeper into the soil. Also drought rarely kills an established plant. The plant may wilt, but with a small amount of water it will soon spring back into life. Excessive heat can be a problem, but for those who remember browned off lawns, once it rains they go green again. Lesson learned, don’t panic!