Peonies are beautiful, long-lived and easy to grow once established. We sell three distinctive types of peonies, herbaceous, intersectional and the tree peony.

In late May or early June herbaceous peonies produce long stems topped with fat buds that open into large, opulent flowers. These flowers come only in a limited range of colours. These are white, pink and red. Although there are a few yellow varieties, these are limited in number and usually quite expensive. However because there are so many shapes there is a wide choice of designs to select from.

This type of peony has lots of petals, which when fully open will form a dome that can be low, like a crown, shaped like a ball or a pompon. Because of their size they sometimes need staking.

This type of flower has two or three layers of petals that open out to reveal the handsome ring of stamens in the centre. Because the flowers are not so heavy they usually do not require staking.

These peonies always have large outer petals, known as guard petals that form a frame work for a cluster of long, ribbon-like petals, referred to as stamenoids. These varieties almost always require no staking.

This type of peony has just one, or sometimes two rows of petals. The stamens in the centre are always revealed. When the flowers first open the blooms usually close up at night, which means they last longer. This type of peony requires no staking.

Peonies in the Garden

Herbaceous peonies will grow in most soils, except ones that stay wet. They grow best in a rich, heavy soil (including clay), but will thrive just as well in a sandy soil once established. Although they prefer full sun, in warmer parts they are happy in partial shade.

Peonies can be grown in a border of their own, but most gardeners would prefer to include them among other plants. They look fabulous with perennials, and the leaves of many varieties turn the handsome colours of autumn as they begin to die back in late August and September. In the spring the new shoots, which remind me of asparagus, are most attractive, a feature that can be enhanced by planting spring bulbs such as crocuses around them. Later, once the flowers have gone, very often there are seed pods which can be extremely attractive. Most of the pods are empty of seeds. 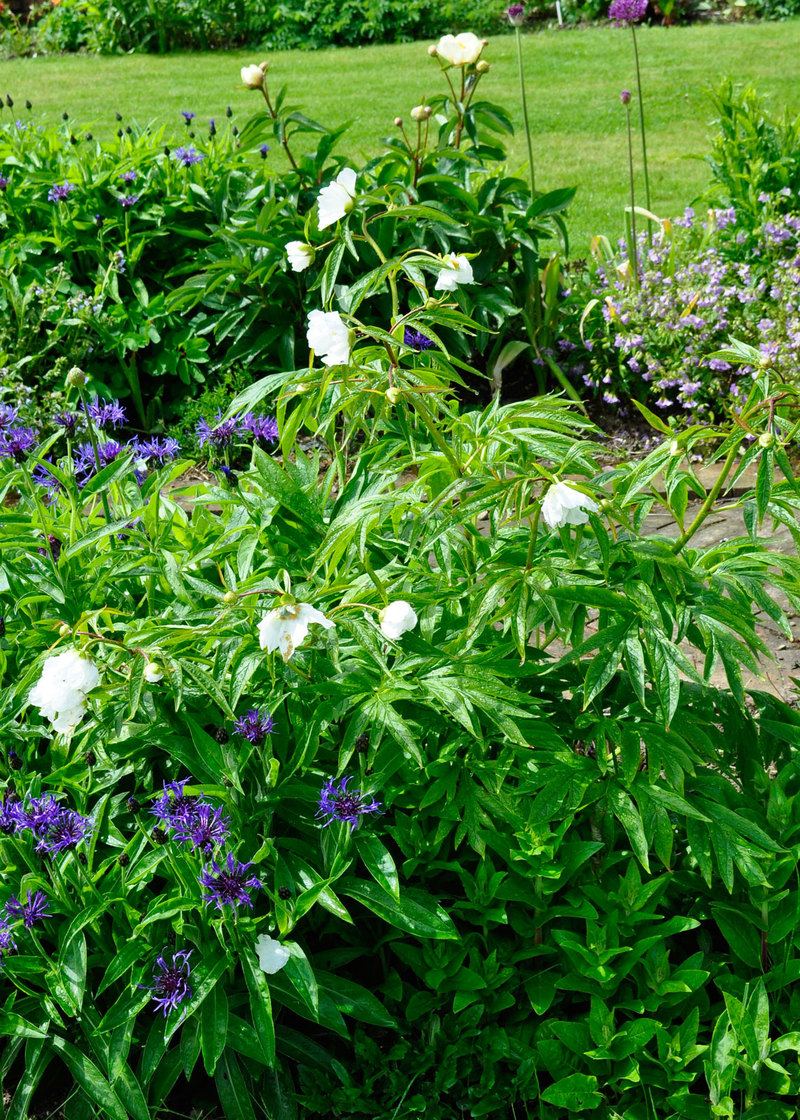 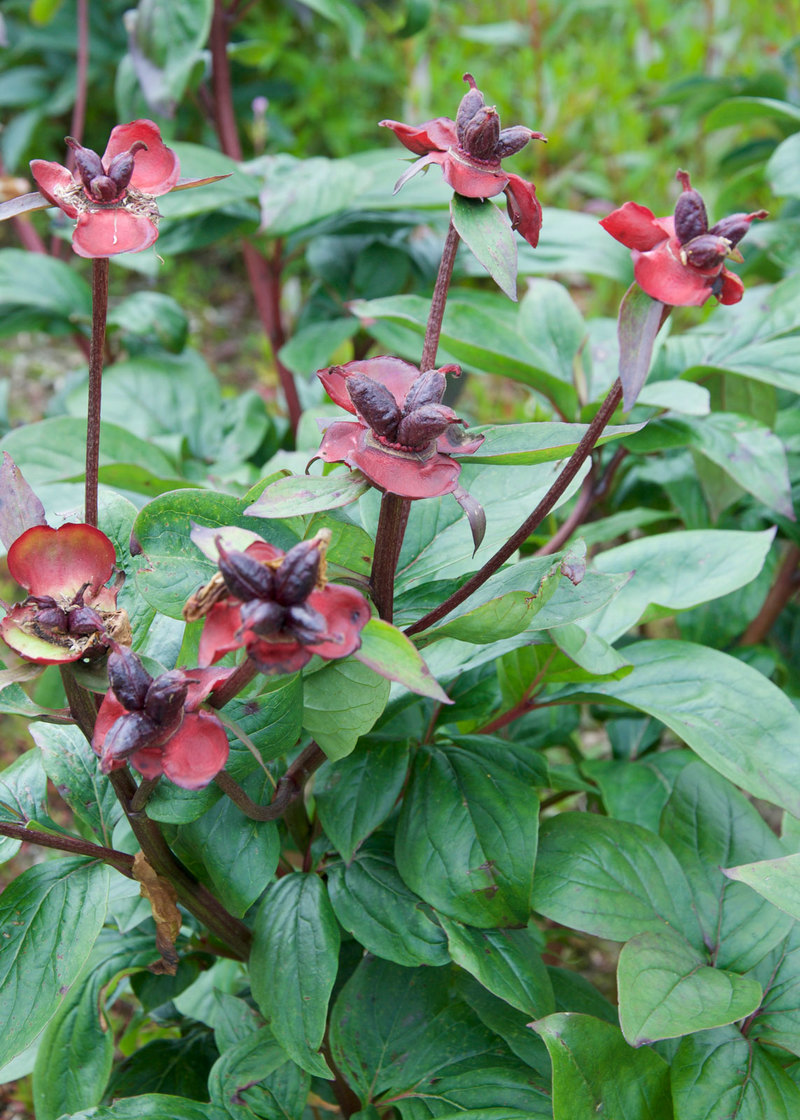 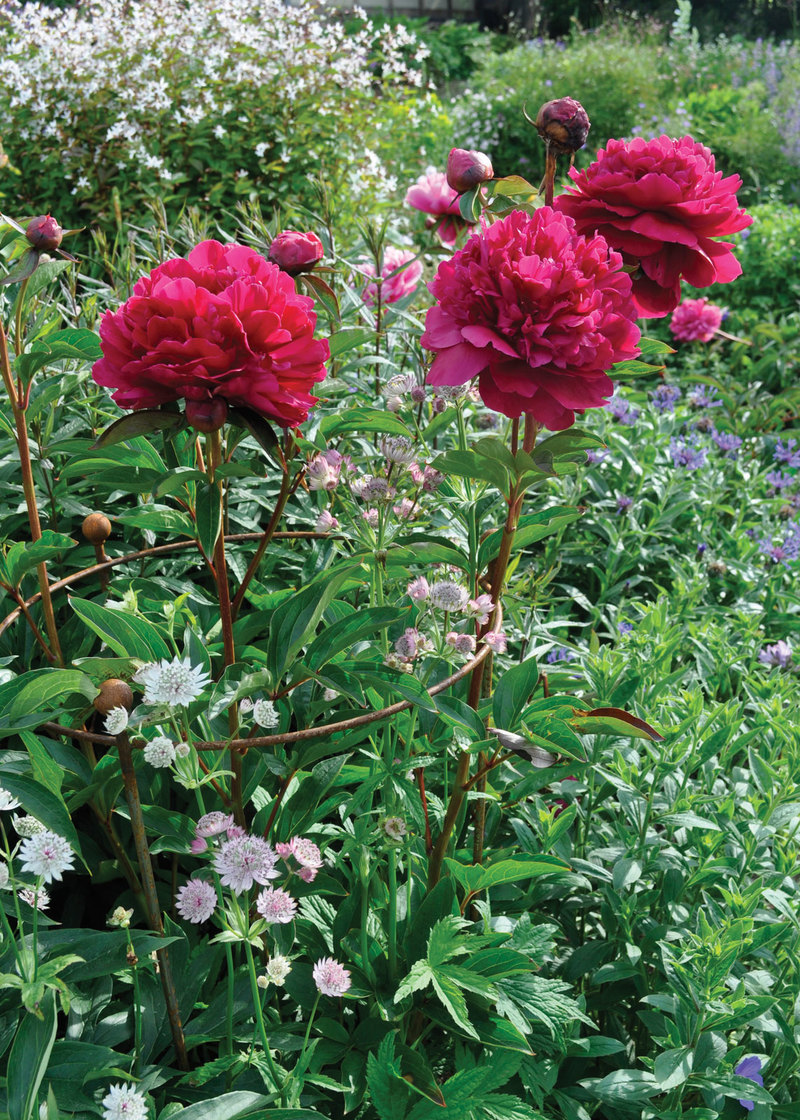 For varieties with less upright flowers, this is the time to put in supports such as wire rings.