(Yarrow) These colourful plants are incredibly useful for growing in borders with other perennials. They add a horizontal accent to the whole layout of the border, breaking what might otherwise be a scene of hummocks or spikes. 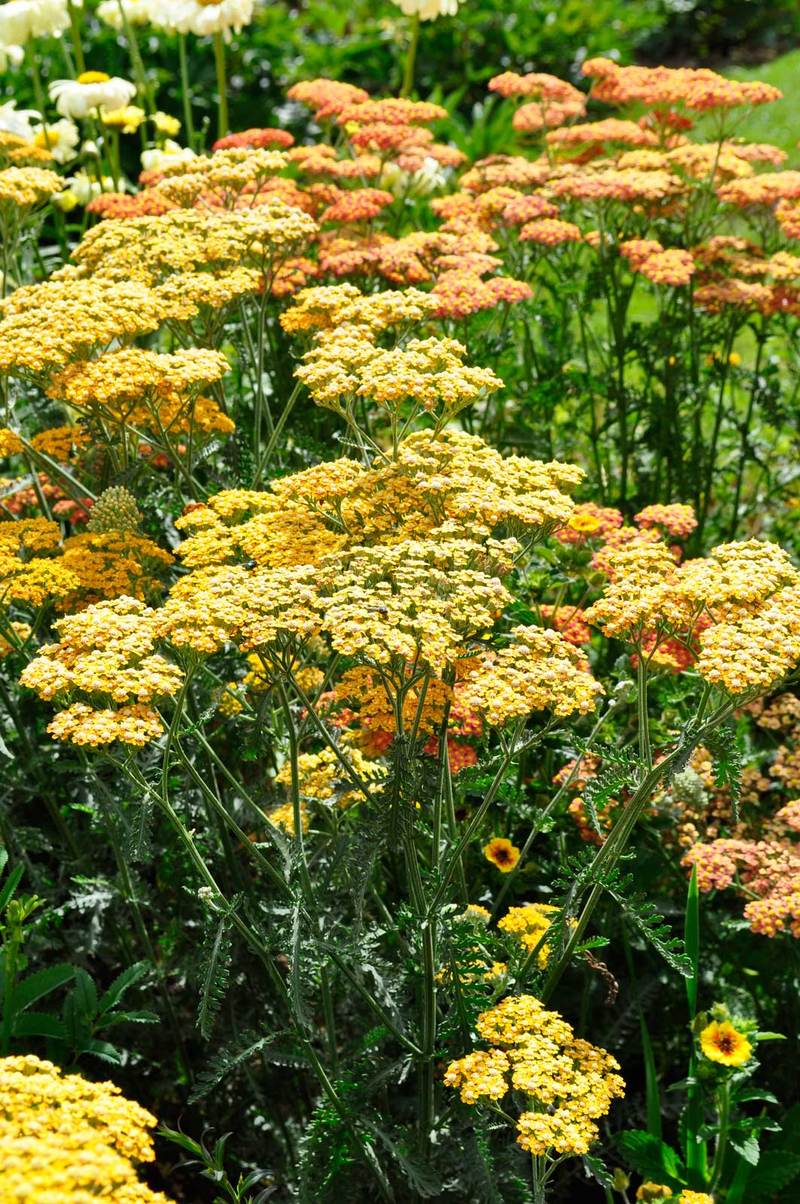 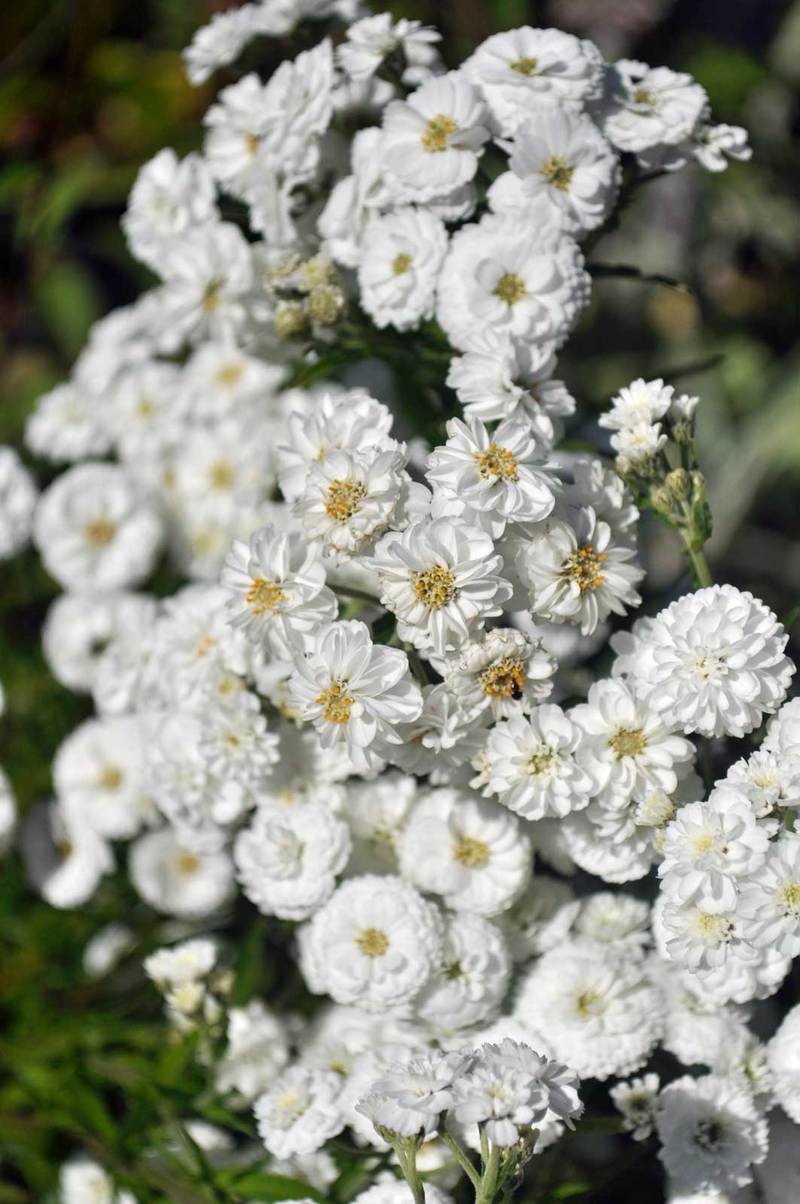 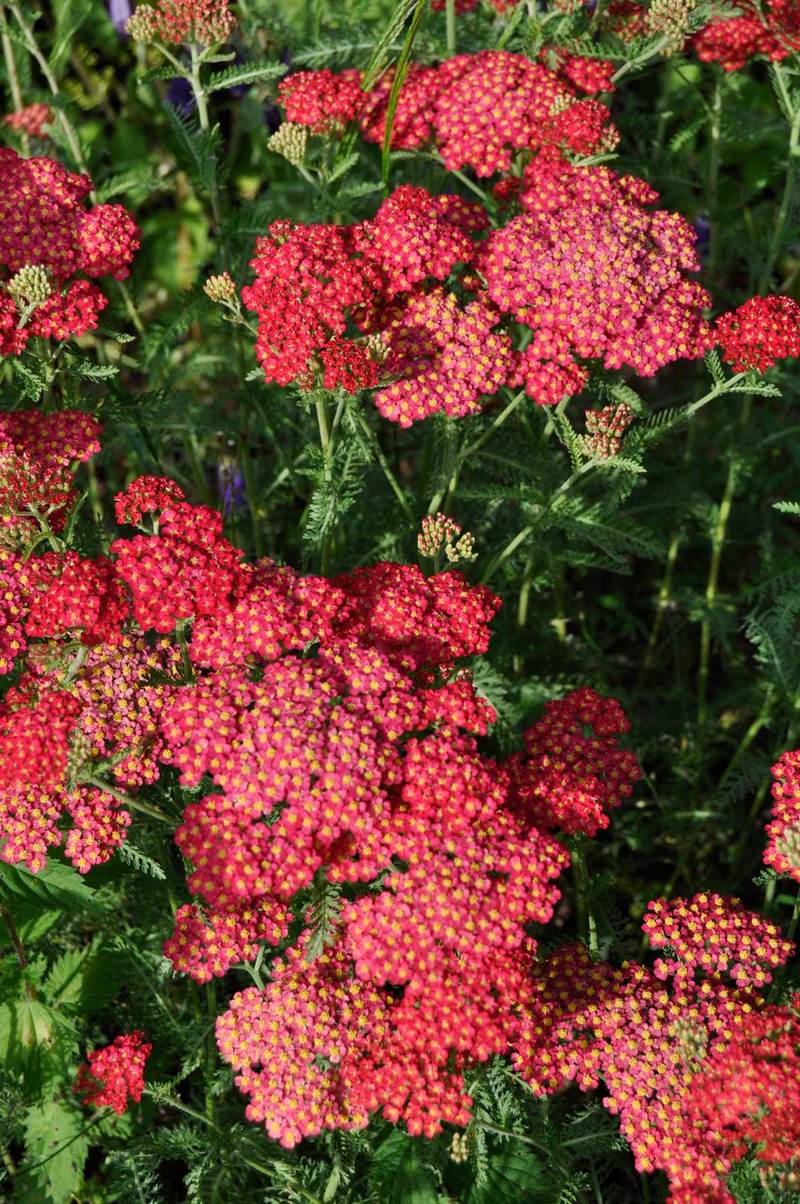 Achilleas can roughly be broken into three types: upright, mounding and creeping - the latter two types being in the minority. Many of the most colourful varieties Achilleas originate from A. millefolium, a white to pale pink flowered plant found growing wild in fields and along verges where the soil can be very well-drained.

These attractive plants bear the small, round, papery flowers in broad, flat heads. Each head is created from clusters of flowers borne on a short branch that branch out from near the top of a sturdy central stem. The blooms range in colour from pale yellow to rich magenta-red, with a few white varieties. The flowers on some of the brightest varieties will open one colour and gradually change to another as the small centre of the flowers get bigger, eventually giving the whole plant an attractive two-tone appearance. The flower stems spring from a clump of pretty deeply divided leaves, which on some varieties can be so finely divided they look feathery. The leave colour ranges from grey or mid green, and when crushed between the fingers the leaves will emit a gentle aroma of thyme. 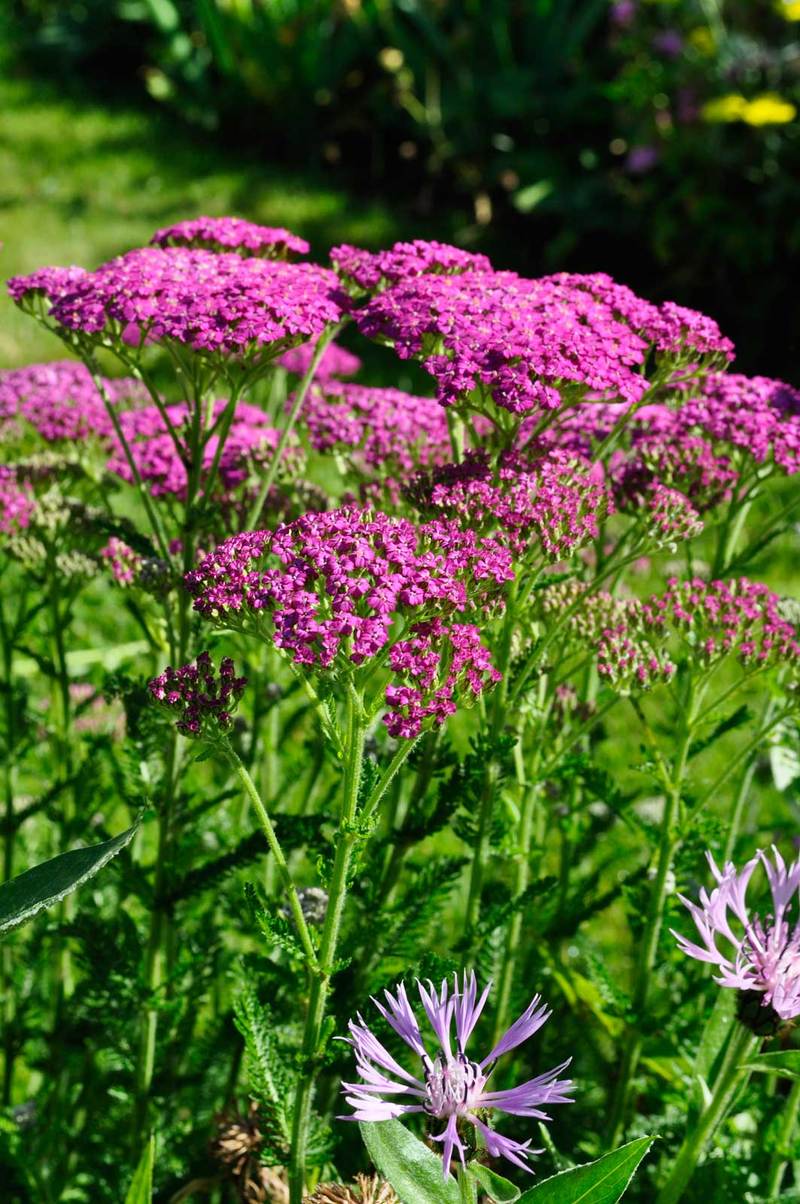 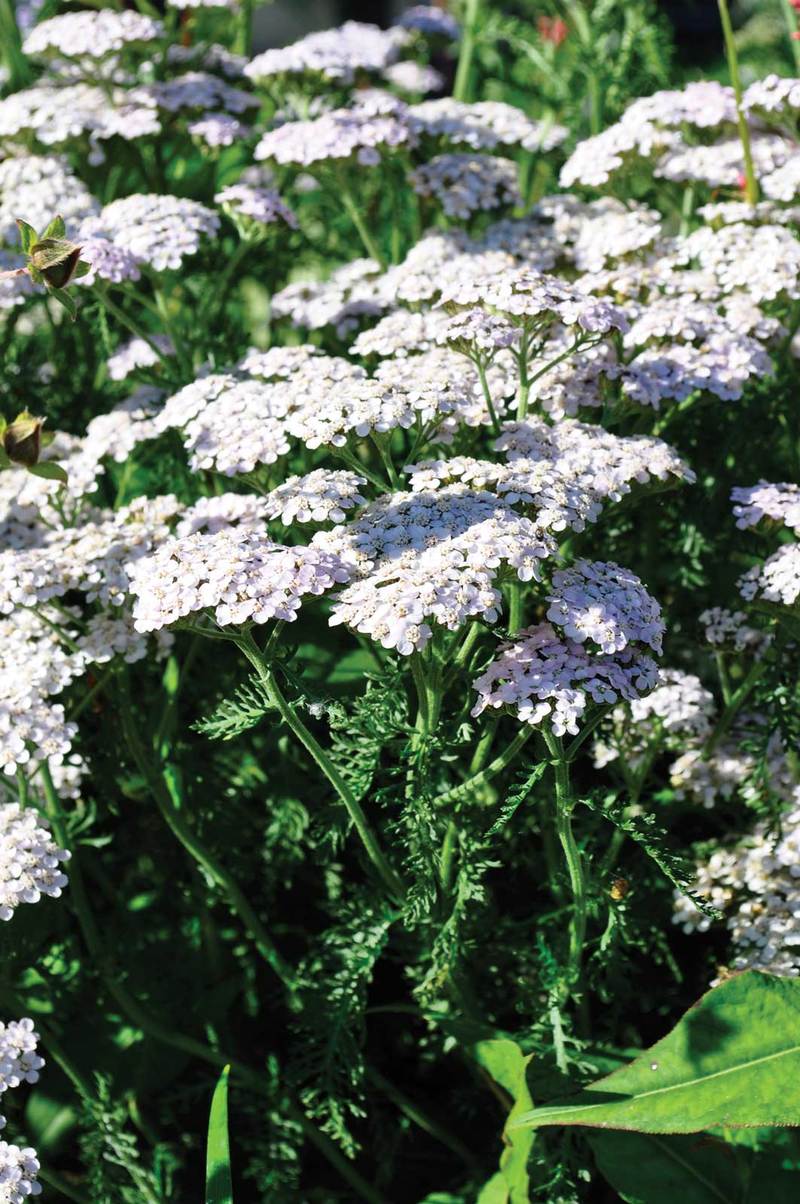 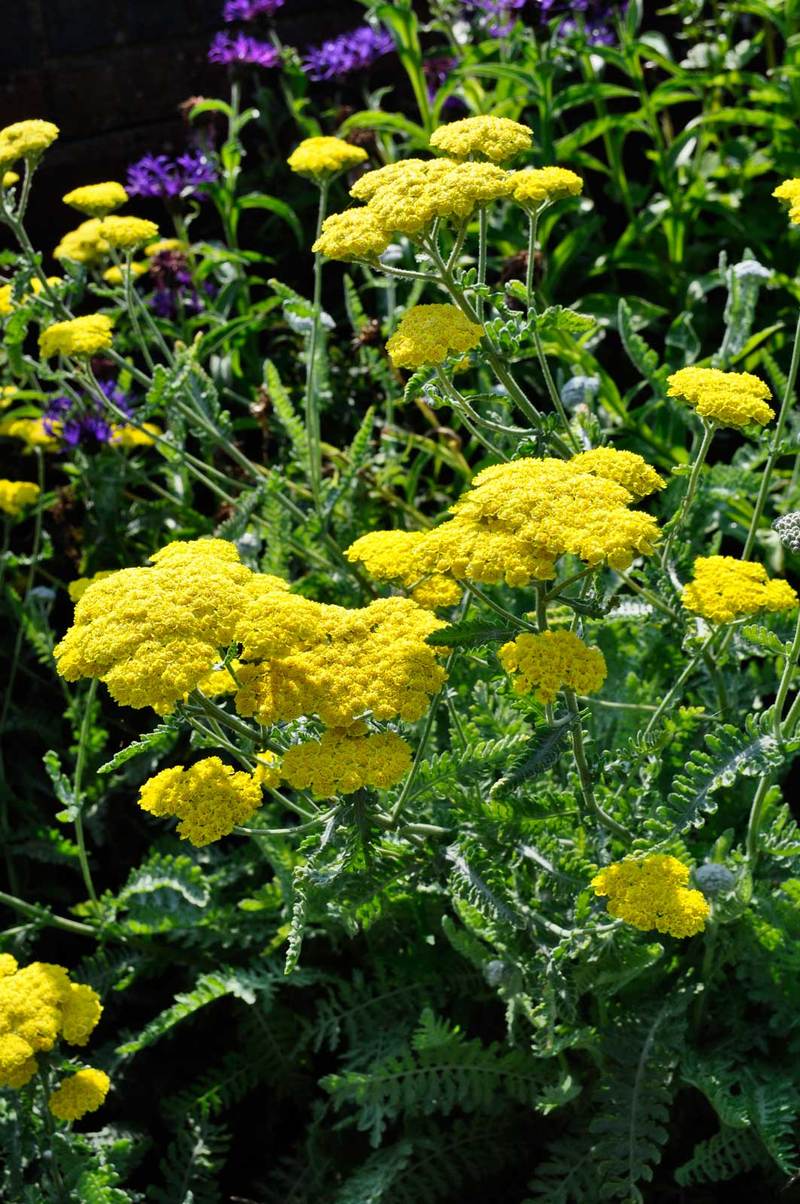 Where To Grow Achillea

Most achillea can be grown in the middle of smaller borders or towards the front of a large border that can cope with an edging plant that grows to about 45cm. Achillea 'Moonshine' and some of the shorter A. millifoliium types are perfect. Toward the back of a border grow Achillea filipendula 'Gold Plate' and Achillea 'Coronation Gold'. 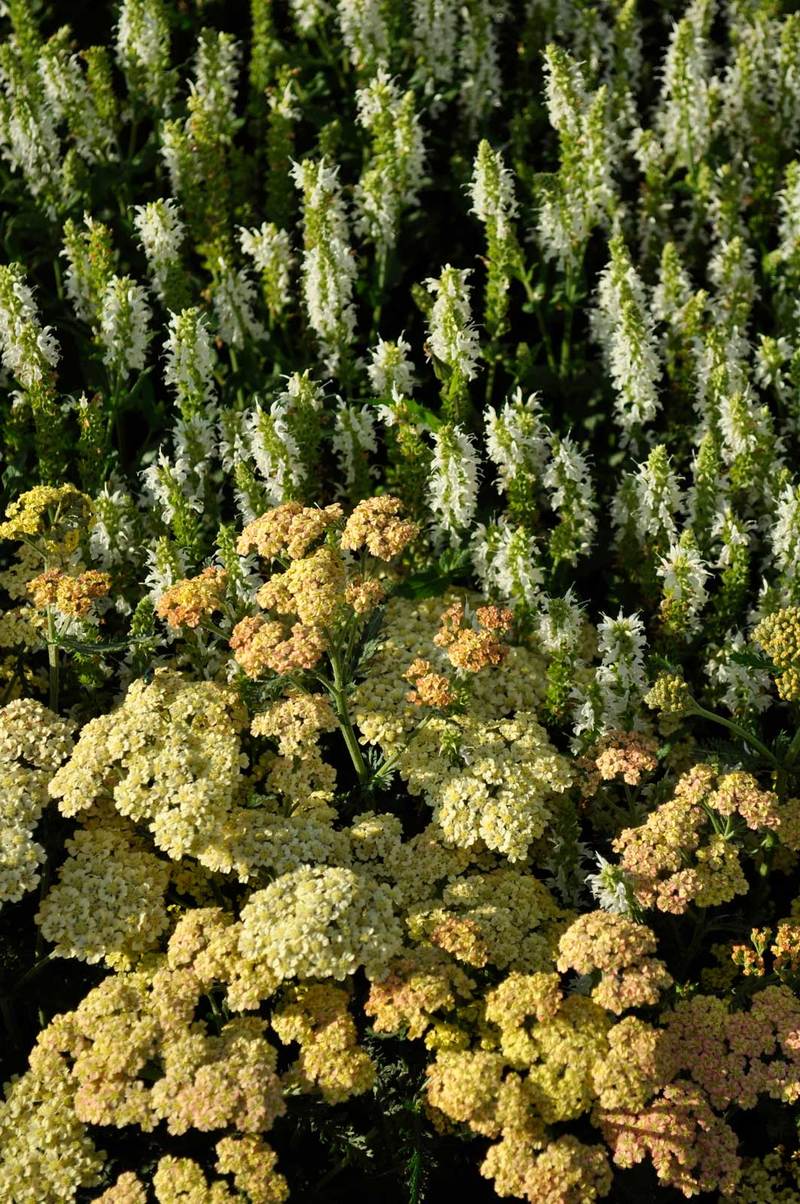 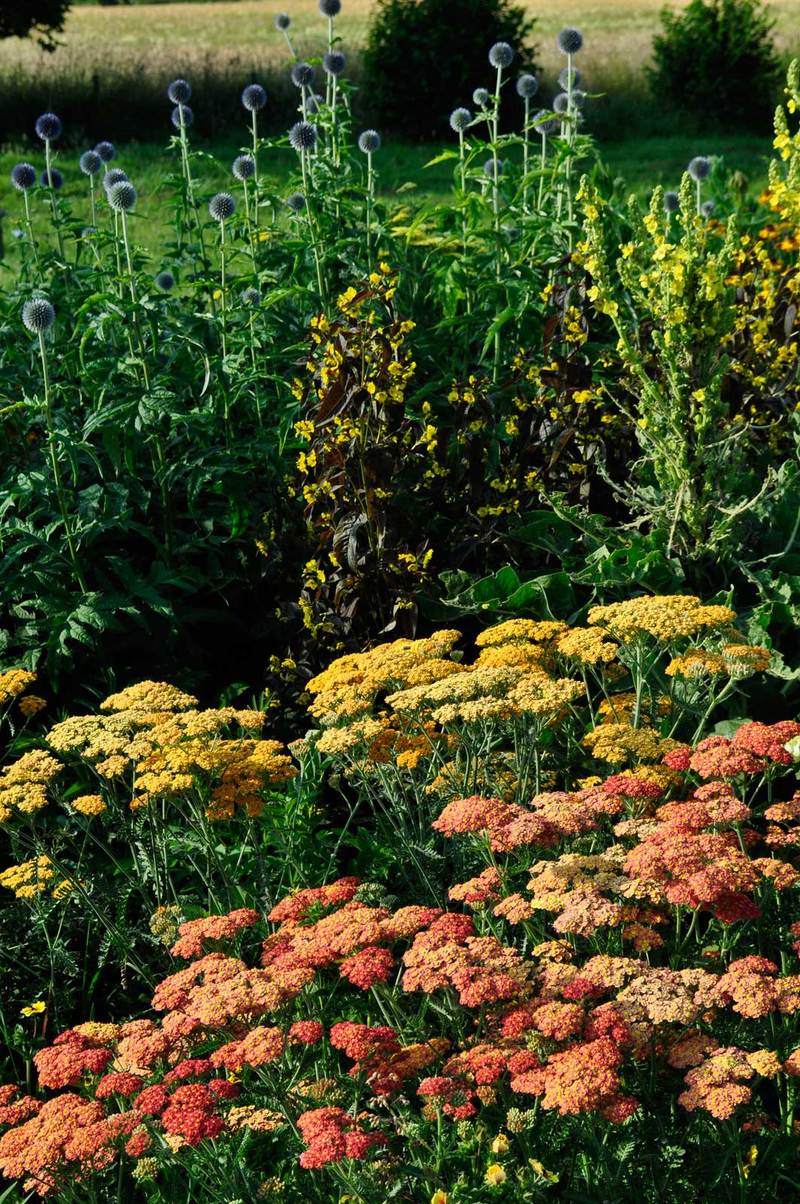 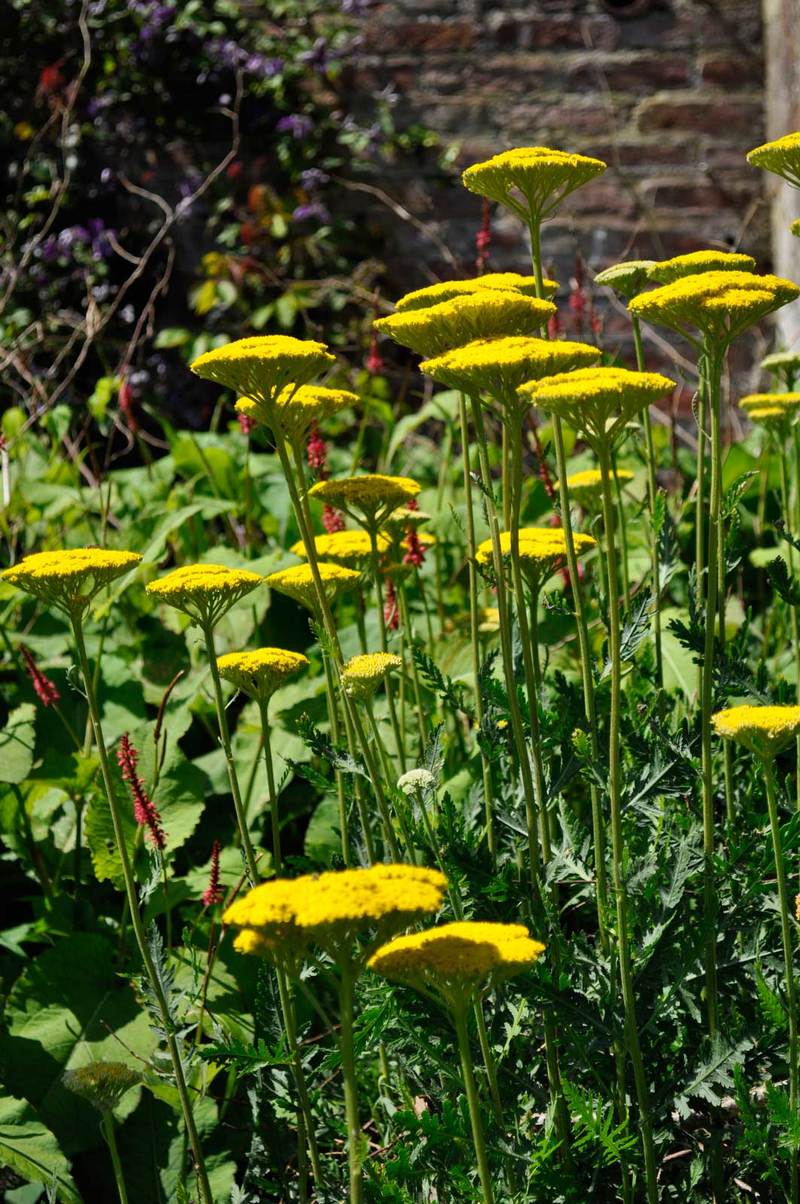 Achillea will grow in a sunny situation with well-drained soil, which means that the best plants to grow with them are those that like a similar condtion. Hardy Salvias are a great choice, the spikes of tiny flowers will compliment the flat-headed blooms of Achillea. Perennials with daisy-shaped blooms like Helenium, Asters and Rudbeckia will start flowering at the same time as Achilleas and continue long after the flowers have faded. Hardy Geraniums are another great option, especially shorter ones such as Geranium sanguineum types, which can be grown in front of Achilleas and will enhance the whole border because the leaves are different in shape.

Although all Achillea are easy to grow the types with fluffy leaves such as Achillea 'Terracotta' and 'Pretty Belinda' may not be as long-lived in a Achillea 'Moonshine' in certain soils. I have grown this Achillea in the same spot with clay loam for quite a number of years. If you extremely well-drained soil, any Achilleas should be fine. Once the flowers have faded, the flower heads will stay attractive for most of the winter. When if they begin to look tatty cut them off.