Bees and Bumblebees are essential to the life of a plant, but sadly in recent years it has often been reported that their numbers are on the decline. A world without the busy bee would not only leave our gardens bereft of sound and movement, but lead to the demise of many plants.

To understand how you can help bees you need to know a little about them. The UK has over 250 kinds of bees and bumblebees. Each type lives a different sort of life; some are solitary, others organise themselves into large sociable gatherings. All feed on nectar and pollen, the nectar being converted into honey to feed the young insects. While gathering nectar the industrious bee delves into the flower and in the process brushes against the stamens gathering pollen on the way. This is then distributed to the flower’s stigma resulting in the creation of seed. 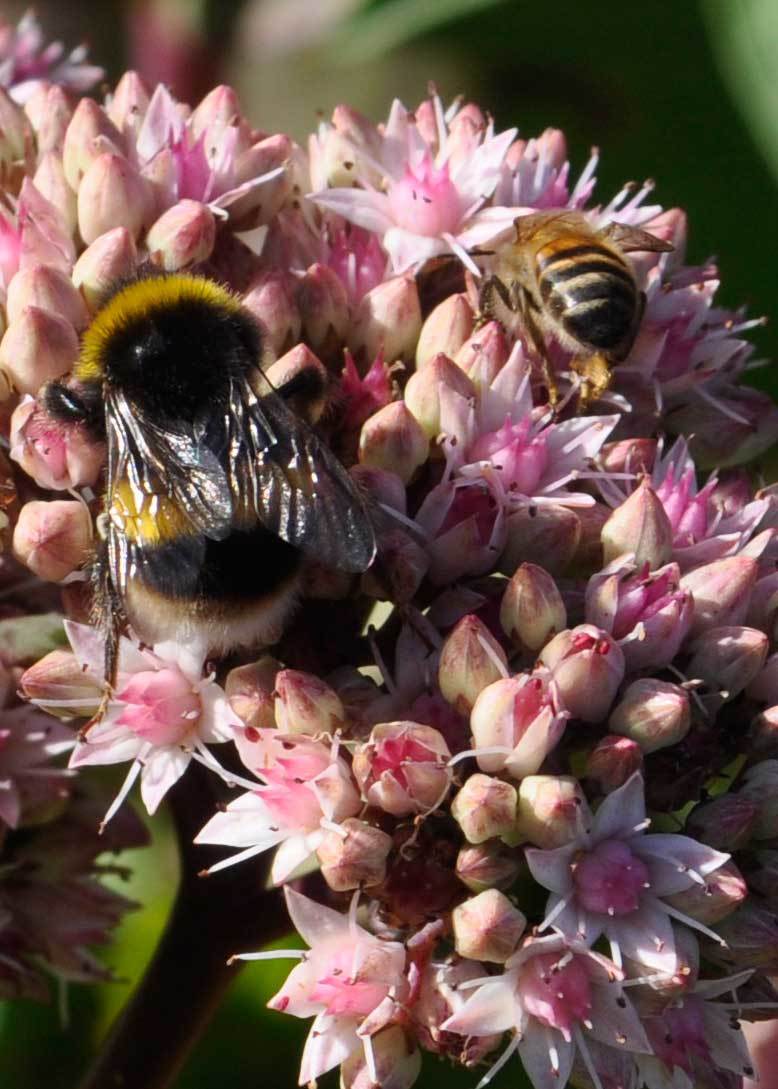 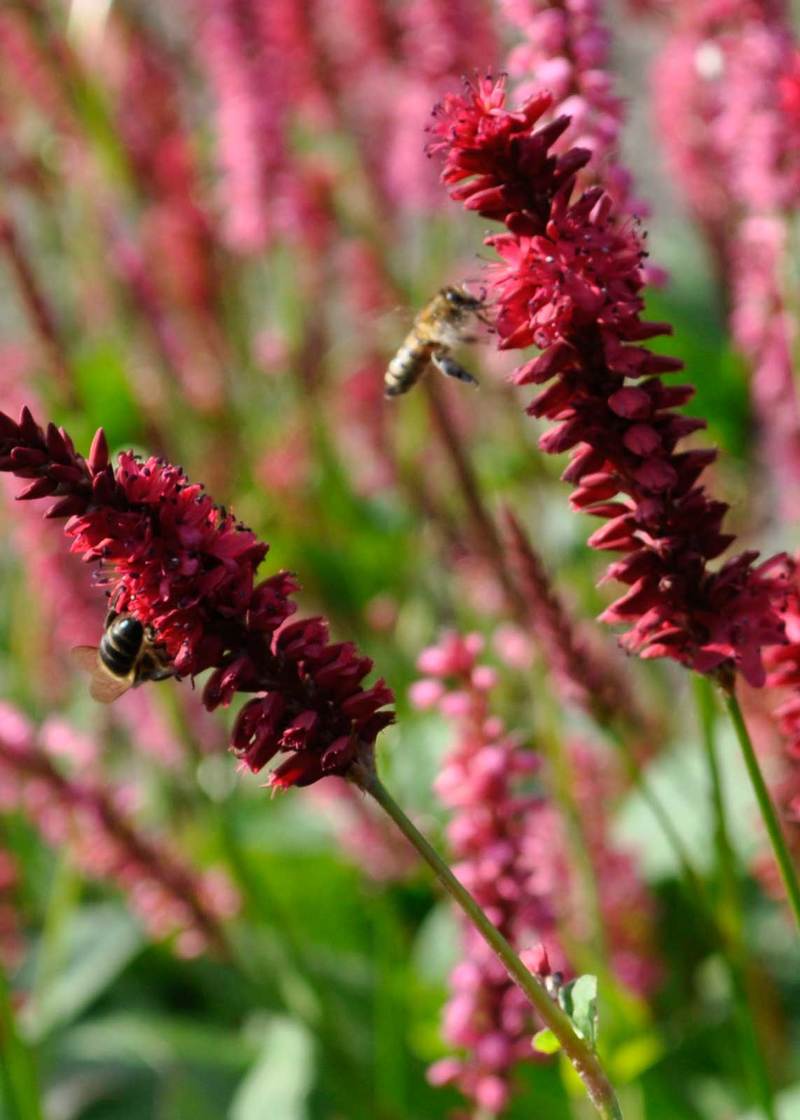 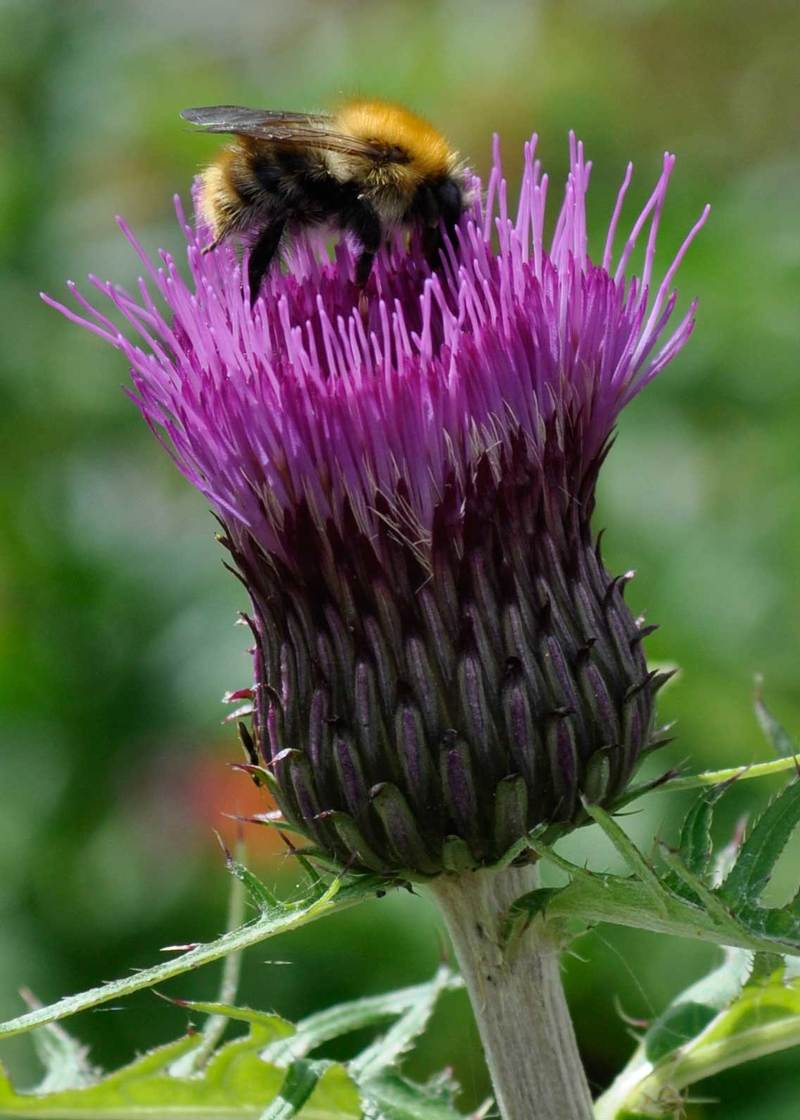 This is where gardeners can help. All we need to do is to grow lots of flowers and to create a truly bee-enticing garden we should grow plants that bloom from late winter to late autumn. All bees hibernate and emerge at different times in spring. I have seen solitary bees and Bumblebees lazily moving between the flowers of Pulmonaria (Lungwort) and Helleborus (Lenten rose) in late February and early March. As the number of flowers increase so do the number of bees. Early spring favourites include Geranium phaeum, (Hardy geranium), Centaurea (Perennial cornflower) and Prunella (Selfheal). I grow many different irises, which are largely ignored by bees, with the exception of spring-flowering dwarf varieties. The evidence of bee activity is in the seed pods that appear later. 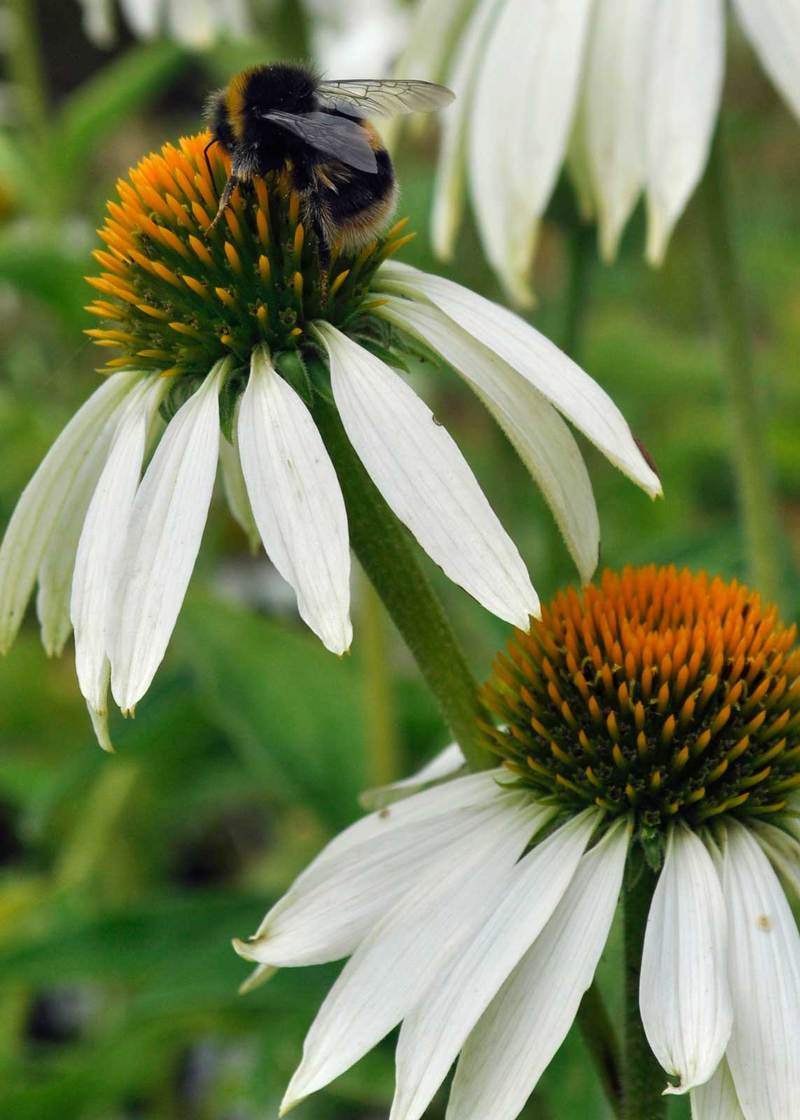 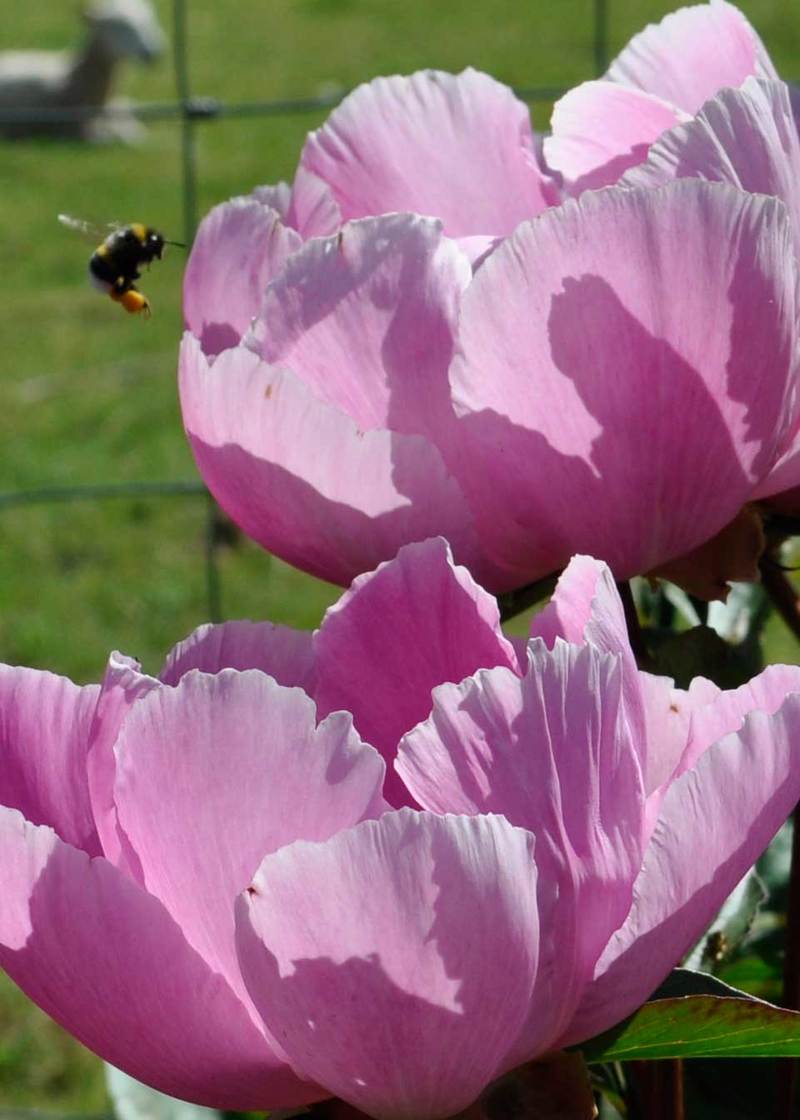 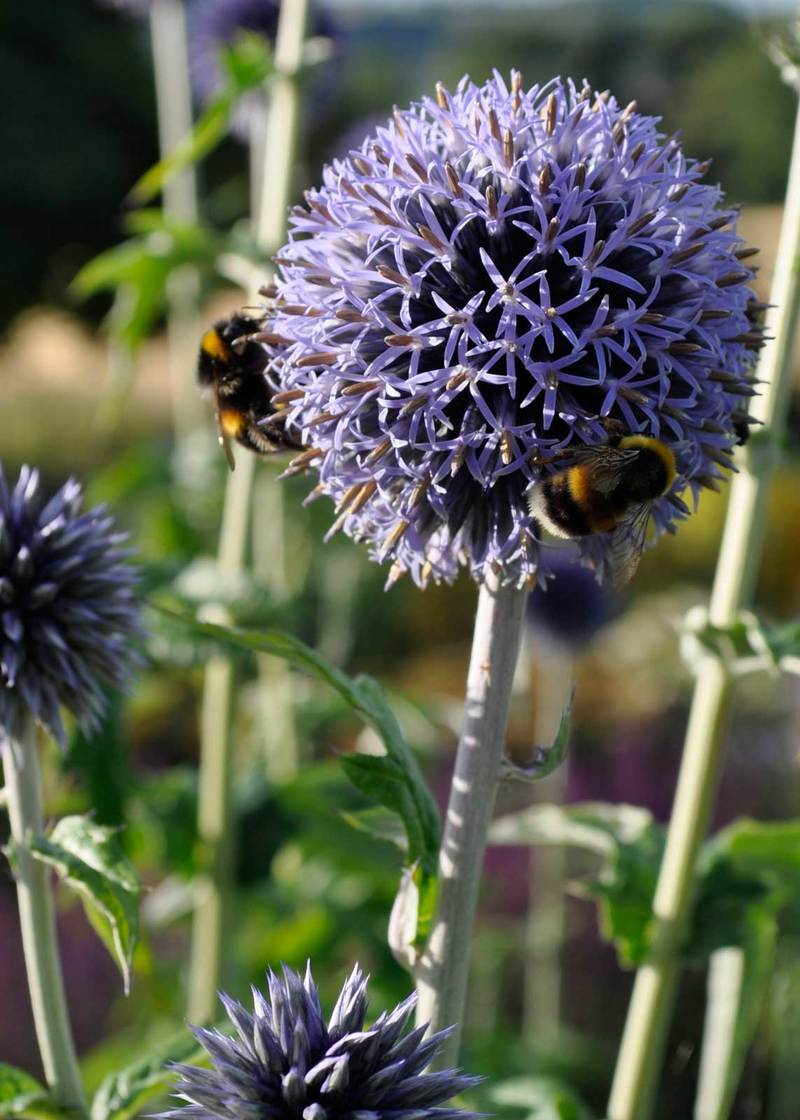 Summer provides the biggest bee-larder with hundreds of different bee-attracting plants to choose from. There is little point in growing a mass of over-hybridised plants if you want to bring bees into the garden. The flowers are either sterile and have no pollen or so densely packed with petals the stamens are hidden. Peonies are guilty of this, but there are single flowered types with just a few petals that open wide to show off the pollen-rich stamens bees delight in. Plants that produce small flowers are ideal and the way they are presented is endless. The little flowers of Achillea (Yarrow) are borne in wide flat heads, while Nepeta (Catmint) produces masses of frothy spikes. Blooms with large lower lips as found on Monarda (Bergamot) and Aconitum (Monks hood) are popular with bees, the lower petals providing a secure landing platform. Veronicastrum (Culver’s root) and Persciaria (Bistort) buzz with bees throughout summer. The slender spikes, which are produced in great quantities, are created from hundreds of tiny flowers, the petals so small they don’t obstruct the bees pursuit of nectar. Similarly the spiky flowers of Echinops (Globe flower) and Eryngium (Sea holly) are moulded from hundreds of individual, petal-free blooms so close packed a bee can roam freely between each bloom without using too much energy. 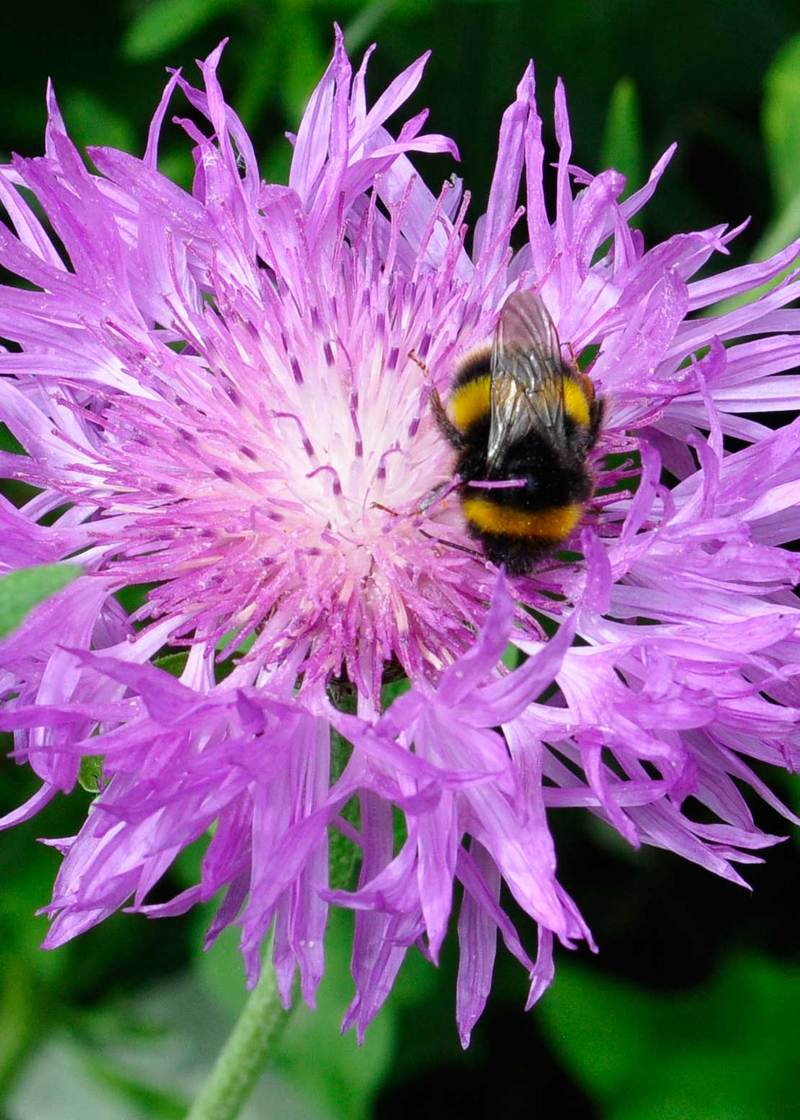 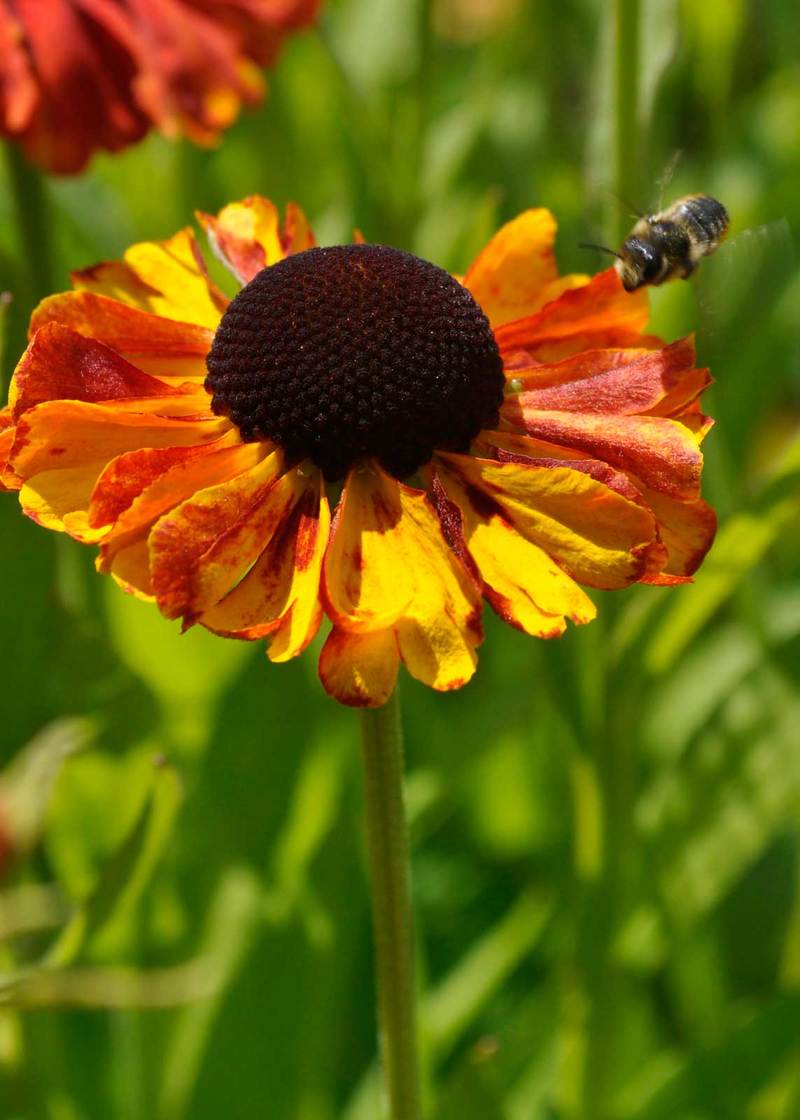 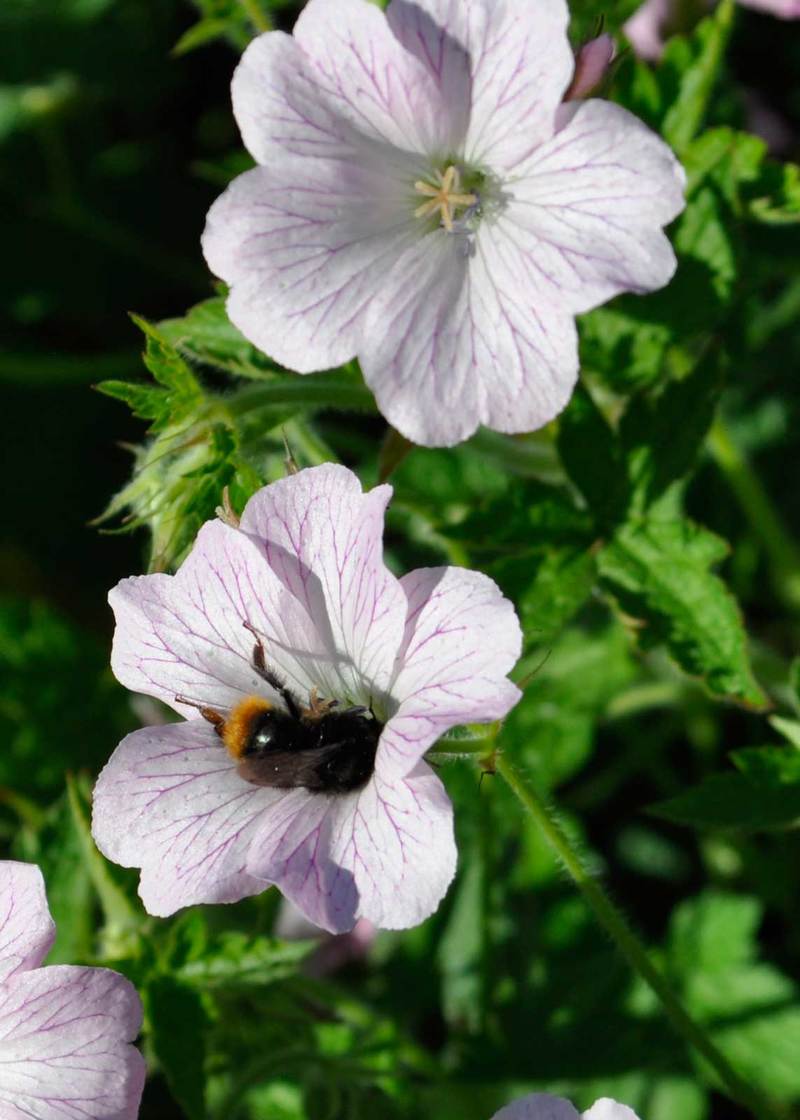 As summer passes to autumn bee activity accelerates with preparations underway for winter hibernation. From September onwards the sturdy headed of Sedum (Ice plant) are covered with foraging bees. Eupatorium (Joe-pye weed) are popular, the tall stems being topped with fluffy heads of tiny pink flowers. Daisy shaped flowers are loved by bees, the ray of colourful petals are a great bee-attractor, and autumn abounds with them. Aster (Michaelmas daisy), Helenium (Sneezeweed), Rudbeckia (Black-eyed Susan) and Echinacea (Coneflower) all originate from North American, but they are perfect for British bees as well as autumn colour.