(Elephant's ears) Mention to a gardener that you like Bergenias and you get a long, confused stare as though to say ‘what those boring things!’ But I really do like and respect these robust, immensely useful plants. Okay, so they may not be the prettiest or most intriguing of garden plants, but they do provide architectural structure, if short, to a border throughout the year.

They will also grow in almost any situation; sun through to shade, dry soils or damp soils (although they don’t like deserts or bogs). They are also long-lived, and are easy to look after, needing little attention. 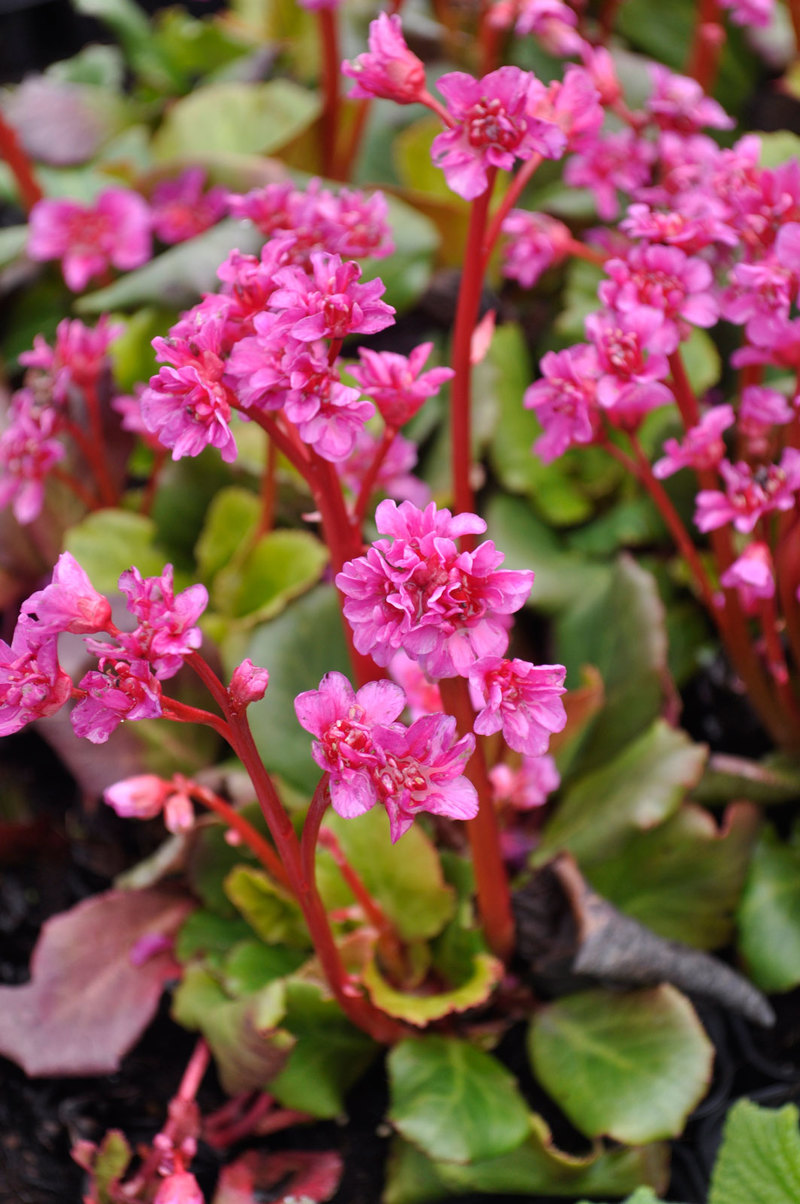 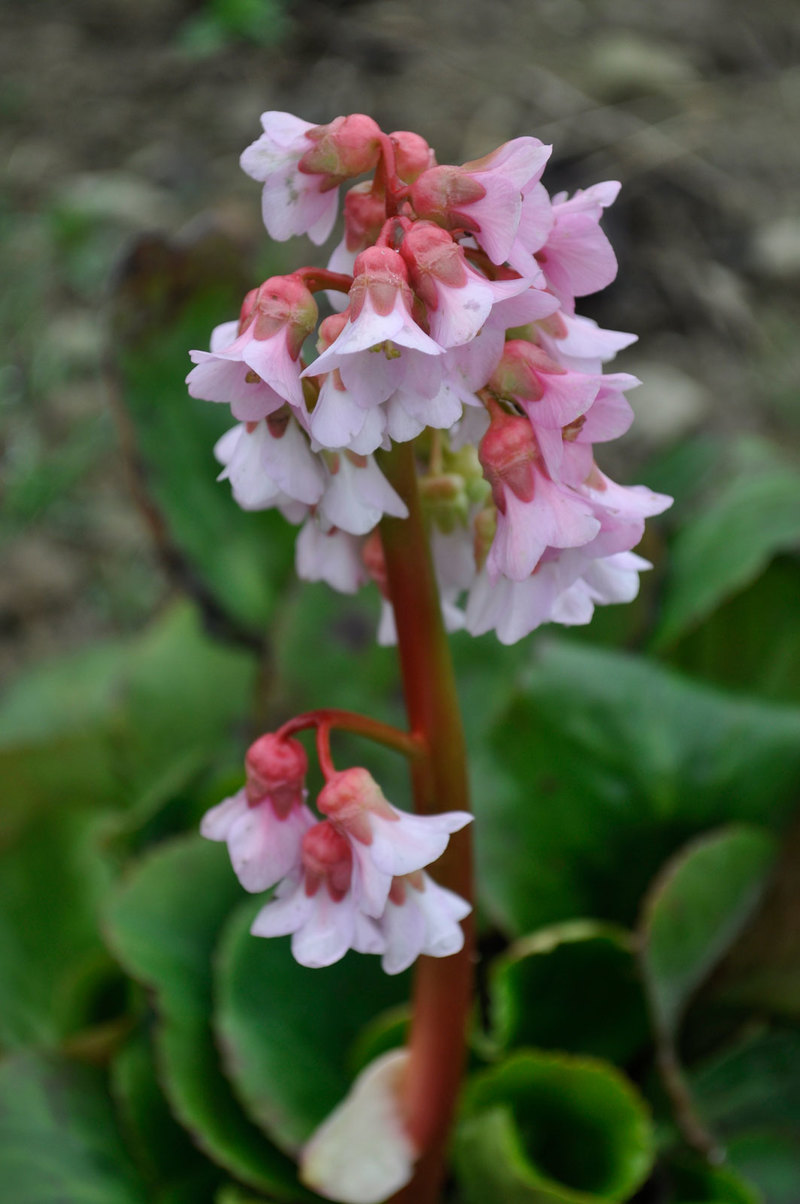 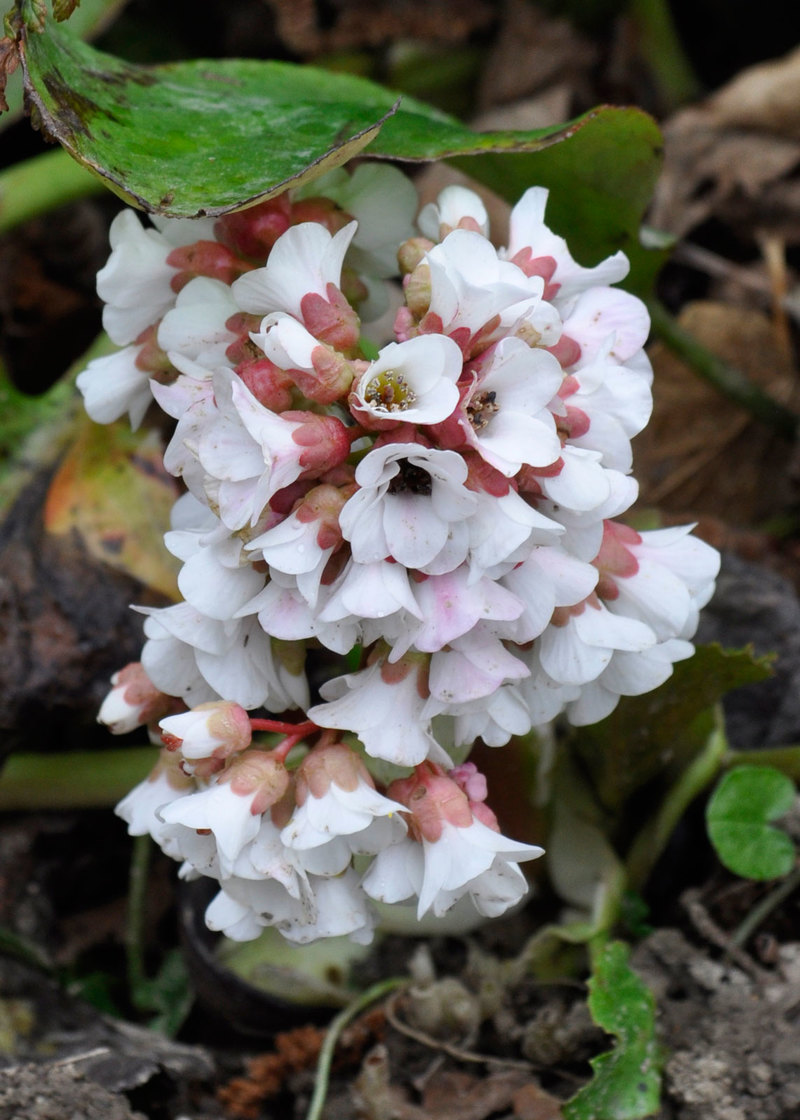 The Glorious Leaves Of Bergenia

A slowly spreading, carpeting plant, the leaves of Bergenias are perhaps it’s most important feature. Large, leathery, mostly evergreen, the leaf shape varies from round paddles to narrow ovals, similar in shape to a wooden spoon. How long the leaf stem is dictates the shape of the overall mound. Some leaves have long stems and flop over making loose mounds, while others have short leaf stems and produce a carpet of neat, tight rosettes. When fully established Bergenias cover the ground so thickly few weeds will get through. Finally, in autumn as the frost arrives the leaves of many varieties turn glorious shades of red.

Bergenias produce clusters or sprays of large bell-shaped flowers that sit above the leaves on strong, upright stems that are often tinged red. The colours range from white through soft pink to deepest magenta. Sometimes they sit in calyces of a different colour, thus adding further interest to the flower. Although most produce only one flush of flowers starting around March and lasting until the end of April or early May, one or two varieties send up further flower stems later in summer, which is useful as few other shade loving plants produce flowers at this time. 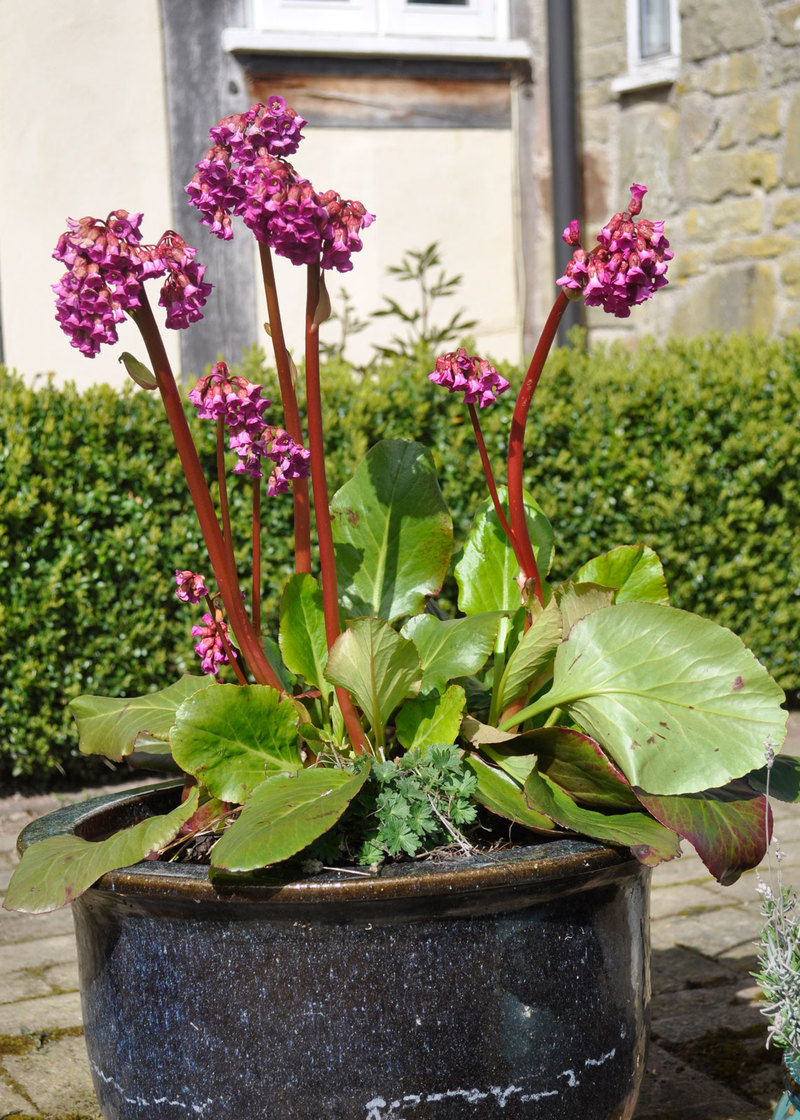 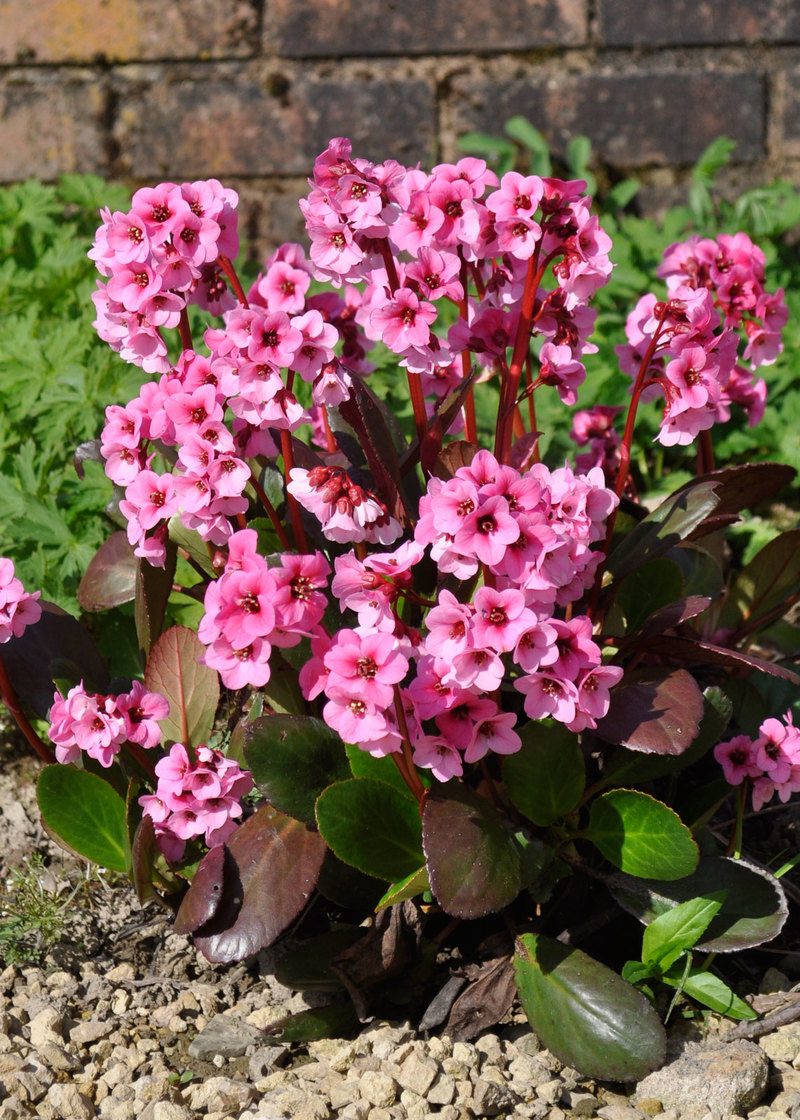 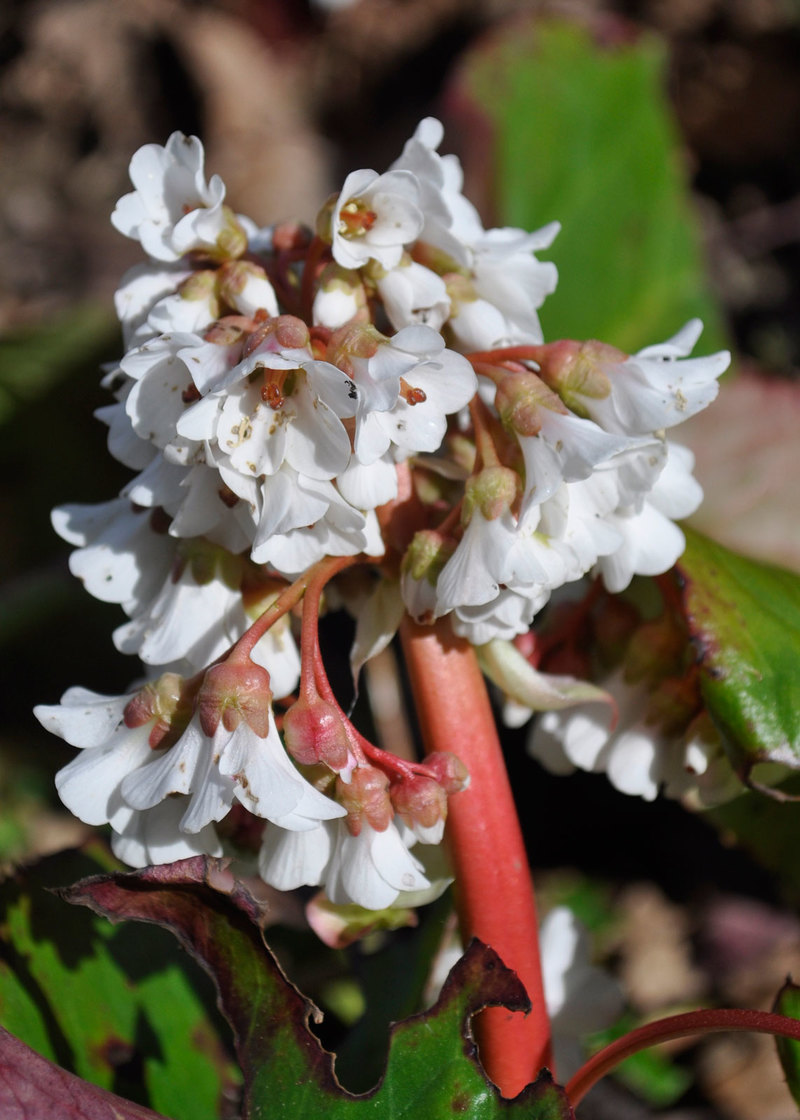 How Evergreen Are Bergenia?

The term evergreen is a bit of a confusing especially as some Bergenias are more evergreen than others. Those that are less evergreen only keep a few leaves over the winter months while others remain solidly green.  The least ‘evergreen’ varieties I have grown are ‘Abendglut’ & ‘Silberlicht’. As with all evergreen plants, when new leaves appear, the old ones turn brown and die off. To keep them neat, and prevent snails and slugs from finding a hiding place it is a good idea to remove these old leaves.

How To Care For Bergenia

A hardy perennial that survives temperatures down to -10 degree. Slow to mature, but when established, long-lived. In time the woody, ground-hugging rhizomes may become long with leaves at the end but otherwise leafless. Dig the plant up and cut back the rhizomes parts as new leaves will emerge from any woody rhizome left. Remove old brown leaves as you see them.

What To Grow With Bergenias

I like to plant Bergenias with low growing perennials that produce totally different shaped leaves to that of the Bergenia. This includes the silver leaved Stachys byzantina and Centaureas, and hardy geraniums with deeply divided leaves like G. ‘Rozanne’ or G. sanguineum ‘Album’. In shady spots with a fair amount of moisture they go well with silvery leaved Brunneras (Silver Wings’ for instance) and Pulmonarias like ‘Opal’. In drier shady spots all Epimediums make great companions. They also look great in a container, either just as a single specimen or as a planter as part of a large group.