Big, blousy, glamorous, fleeting, whatever you feel about Oriental poppies they are hard to ignore. Wonderful for mixing in borders, they produce large, often brightly coloured flowers that bloom from mid May into June.

The blooms unfurl gracefully from large, hairy buds and open into deeply cupped, or shallow saucer like flowers. Some have only a single row of petals, while others are semi-double with several rows of petticoat like petals. The texture of the petals also varies. It can be smooth and silky, delicate as crepe paper, or ruffled. Most have smooth petal edges but a few are serrated along the edges. In the centre of all oriental poppies sits a velvety, black doorknob that is fringed by fluffy black stamens. The colours range from white, pink, to salmon oranges, vibrant reds to dusky damson. 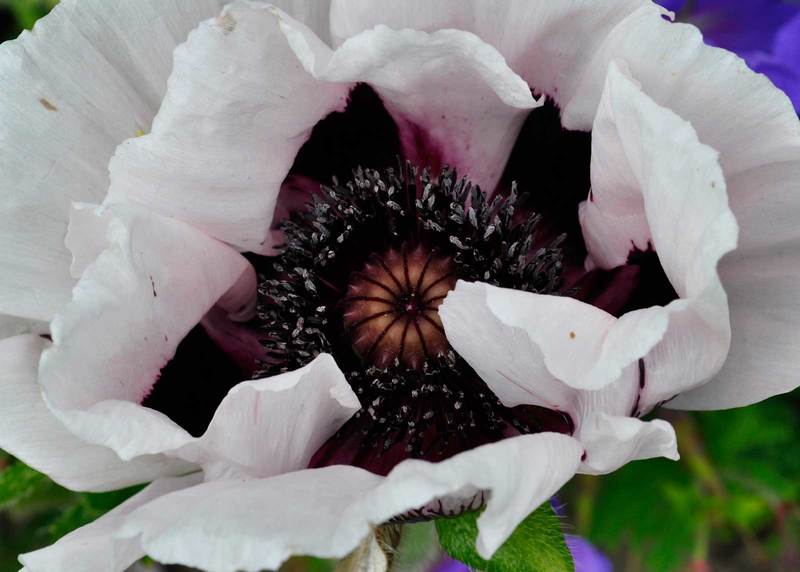 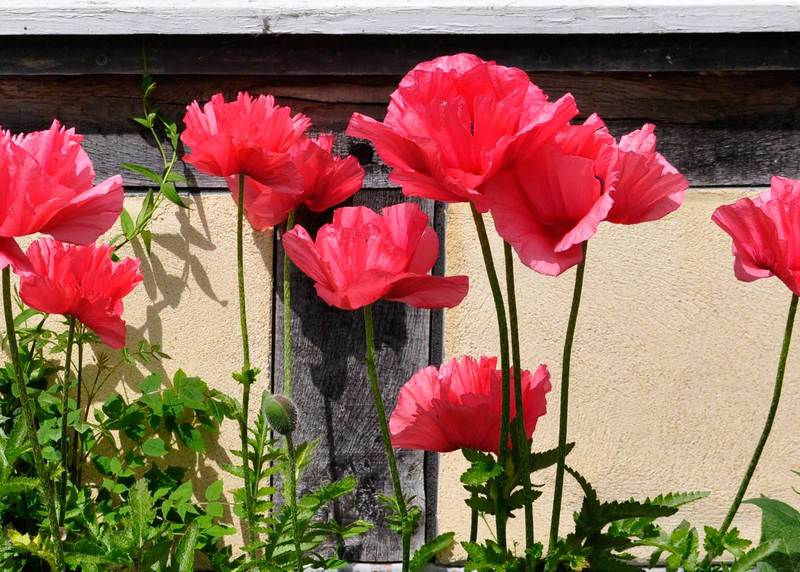 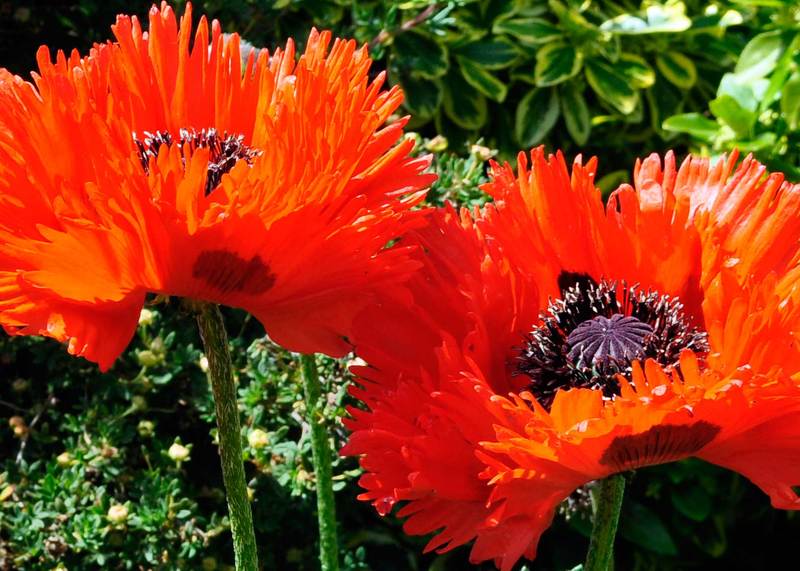 The flowers are carried on thick, bristly stems, which if snapped seep a white sap that as far as I am aware is not harmful. At the base sits a dense rather tufted mound of long notched leaves. These disappear after flowering emerging later in summer with lots of new growth, which stays around throughout winter. Over the years many new varieties have been introduced, but in recent years, due to problems in Holland the number available to gardeners has been limited. Sadly seed grown varieties are popping up all over the place. These are inferior to those raised from root cuttings, so watch out.

The flowers are limited in colour. Red is the traditional colour, Papaver orientale 'Turkenlouis' being one of the best. There are lots of pinks, including the old favourite Papaver orientale 'Mrs Perry', which as black thumb prints around the big black centre. Papaver orientale 'Turkish Delight' is similar but has no black on the petals. White poppies are simply delightful. The counterpart to 'Mrs Perry' is 'Perry's White'. Both come from the great stable of Perry nurseryman, sadly no longer going. Papaver orientale 'Black And White' is a superior plant in form but can be a bit fussy until established. 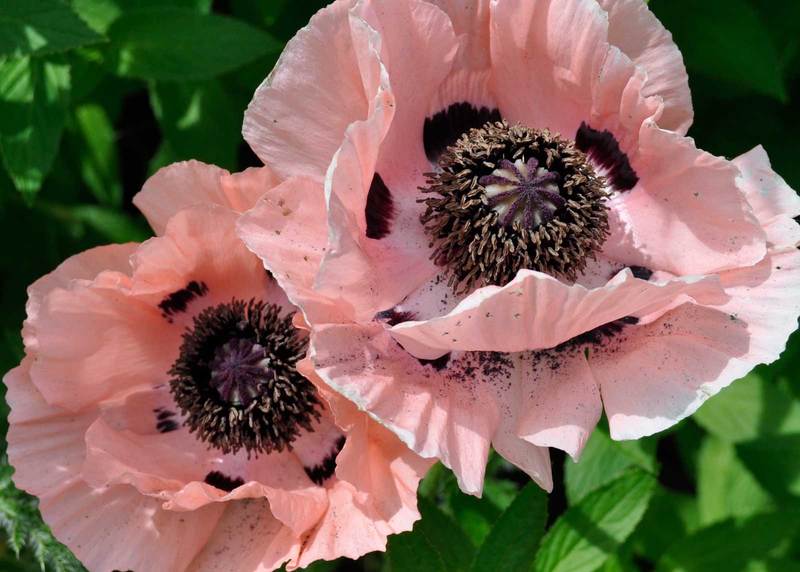 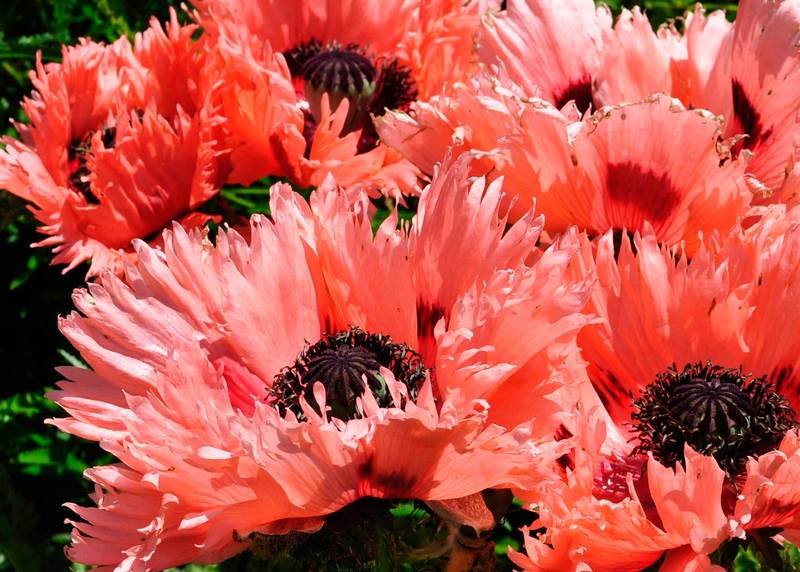 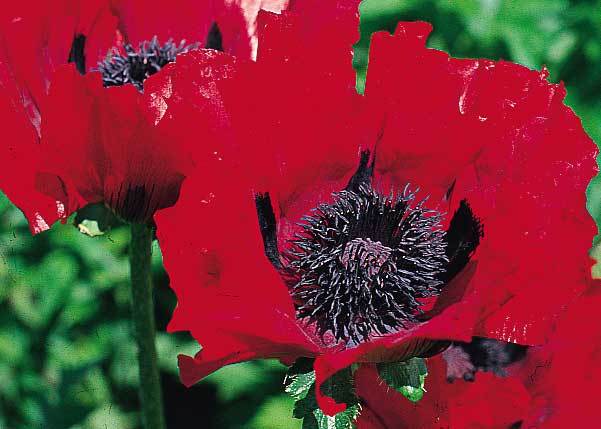 During the 1990's many new varieties arrived on the market, none is as famous as Papaver orientale 'Patty's Plum'. The delightful dusky purple flowers are a very unusual, and intriguing colour. Like many poppies the flower stems are so tall they are liable to tumble forward. This fault has largely been over come in later introductions, many of which (for me) have flowers that are not in proportion to the plant. Having said that Papaver orientale 'Burning Heart' with large, bright red-pink flowers has few faults; the stems are short and it flowers for ages.

WHERE TO GROW POPPIES

Oriental poppies are easy to grow, long-lived and tolerant of many types of soils as long as it is well drained. They really do not do well in a soil that stays wet during the winter, however they don’t mind poor soils, or rich soils. They do best in a sunny spot.

WHAT TO GROW WITH ORIENTAL POPPIES

Poppies need border companions that do not compete with their large flowers. Lupins are good with them as the disciplined upright spikes of flowers providea  handsome contrast in shape. Low mounding plants such as hardy geraniums, geums, centaureas are ideal for planting in front of them as are short irises. Be a little careful with taller irises, as the large flowered varieties can compete with poppies and neither benefits.

After flowering the leaves of poppies die right back (to make root growth) and re-emerge with even more vigour in late August. This means that during July and August there will be a gap in the border. If poppies are planted with other perennials the gaps are filled quickly with the surrounding neighbours leaves and flowers. Certain plants come into their own just about this time. Calamintha, Coreopsis, Gypsophila and Veronicas are just a few.

However you choose to grow poppies, as long as you love big blousy things you can never be displeased with these beautiful, easy to grow plants.